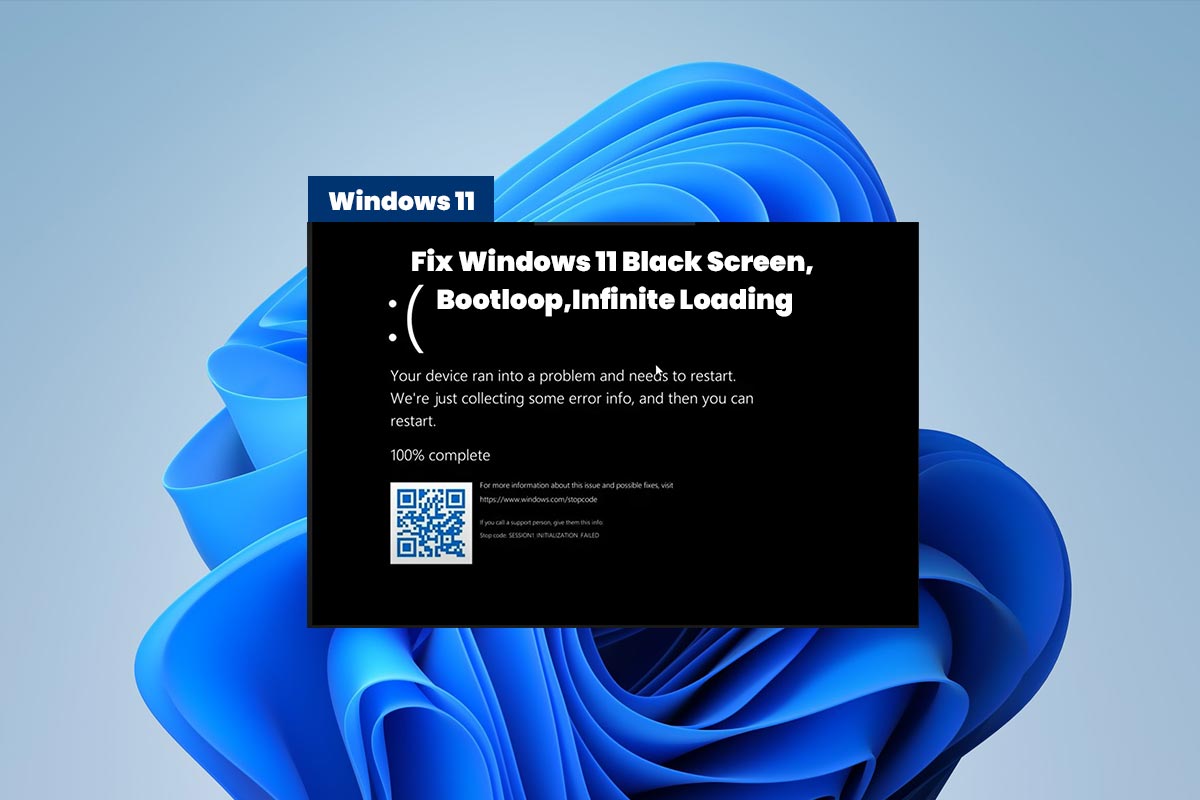 This article will explain every detail of the Windows 11 Black screen of death, Infinite Bootloop,Stuck Loading Screen.

The Most Possible And Most Common Windows 10 Or Windows 11 BSOD Error Is:

What Does Black Screen Of Death Error (BSOD) Mean In WIndows 11?

Black Screen of Death, is a stop error that occurs in the Windows system after a system crash. It means when an operating system reaches a state where it can no longer operate the system safely.

What Are The Possible Reasons Of Windows 11 Black Screen Of Death Error?

Of course, these are just a few of the many reasons which could lead to a black screen Of death. But I think these are the major ones. Check Windows 11 FAQ page for more deatils.

Note: The solutions (For The Windows 11 Black screen of death) depend on your system condition. Different people have different problems and, of course, different solutions, whether the Black screen error occurs previously or after the login screen. If it happens before, the chances are that there is an issue with the device driver or hardware issue. If it’s after, the problem is either Windows or an installed application.

IMPORTANT NOTE: Before you do anything drastic. Don’t worry. You haven’t lost all of your files. If you are worried about sensitive information and data, of course, assuming something like serious hard disk corruption hasn’t occurred. I’d highly recommend taking your computer to a specialist or simply getting yourself an external hard drive enclosure. Then you can remove the hard drive from your current pc, place it in the enclosure. And then connect it to another device, such as a laptop, where you can pull out all of your essential data. And create a full backup of all of the different files. Then you can insert it back into your computer. And simply reinstall windows 11.

Many new Windows users or Many Players who use PC For gaming and upgraded to Windows 11 complain about the same thing happening to them. so you are not alone in this. Let’s fix the BSOD error issue.

1. First of all, you need to get to the windows startup repair screen. There are two basic ways of getting here.

You’ll need to do this roughly twice and upon the next boot. You’ll see text under the loading icon saying preparing Automatic repair.

2. Simply wait for it to go through to completion. And then, simply click Advanced Options [Above Picture].

3. Now, when asked to “Choose an option”, click on Troubleshoot in the bottom left. And then “Advanced options”.

4. If this issue started after installing software or changing settings. You can click on Startup settings and then Restart.

5. Once it restarts. You’ll see a screen with a list of options. A more basic version of windows with fewer features, allowing you to uninstall problem software or undo settings that broke your system. We’re going to simply boot into safe mode.

Press either 4 for normal safe mode or press 5 for safe mode with networking. It will allow you to use the internet.

When you’re done uninstalling problem software. Or undoing settings changes. Upon the next reboot. Your computer will restart normally and let you use it as per usual. Hopefully, the Windows 11 Black screen of death, Bootloop, Infinite Loading issue is fixed.

If the is with system files, this method will fix the Windows 11 Black screen of death, Infinite Bootloop, and Stuck Loading Screen. Let’s Start:

If you’re not sure what caused the issue or the previous method didn’t work. Return to the troubleshooting screen where we were earlier.

2. Now, you may be asked to enter a user account and password, and if so, do that.

3. Let’s get to the right drive. Simply type C: and then press Enter.

From here, we’ll run a few commands. That should hopefully fix your windows installation without anything happening destructively. This process usually changes no files. All of your programs and documents should still be in the same place when completed, unlike system restore, where some files and programs may be lost.

Now, This program simply checks every file on the disk for damage and attempts to repair it. If any is found, this, of course, can take some time to complete. So be prepared to wait if it appears to be stuck. It could be going through very large files or simply trying to repair something.

6. Anyways, Once the program is done. If this cant find anything. Maybe the issue has to do with your computer’s boot files instead. We can repair these by running the following commands:

(This one could, of course, take some time to complete)

(Of course replacing C with the correct drive letter, if yours is not C.)

We can do that by typing the following commands.”

This could take an even more extended amount of time. So once again, be prepared to wait.

9. Now, all you have to do is type in Exit and hit enter. You will get back to the blue screen.

10. Then simply choose Exit and continue to windows 11. Now, hopefully, everything’s working correctly upon booting up into windows, and you’re done to fix the Windows 11 Black Screen Of Death.

So, whether you’re performing updates or after recent updates or installing new software, you’re getting a Black screen of death error like mode exception not handled, kernel data in the pager—a lot of errors pertaining to this problem.

A system restores point can fix any type of Windows 11 Black screen of death error.

1. Let’s jump into this. This is a pretty straightforward process. So the first thing, I’d recommend you to enter the troubleshooting utility on windows 11.

Suppose you do a hard power off three times in a row. Windows should automatically attempt to launch the starter prepared utility. And if it doesn’t find anything. It will give you the option to select Advanced settings.

2. Once you are in the Startup Utility. Click on Troubleshoot. On the next screen, click on the “Advanced options.”

3. On the following screen, you can see a bunch of options. We already explained in the previous section how to fix the Windows 11 black screen of death through startup repair in safe mode.

This option will use a restore point recorder on your pc to restore windows. And this is something I would highly recommend here, guys.

4. Next, It will open a System Restore widget. Click on Next.

5. Next, assume you have a restore point saved on your computer like the picture above. You have to select the most recently created one, and you’ll choose Next.

6. Next window, You can see the restored drive. You shouldn’t actually have to select the Drive. Also, you can scan for effective programs. But we’re going to keep it all default here. And then we’re going to click on Finish.

7. Now, It will ask you for confirmation. It says, “Once started, System Restore cannot be interrupted. Do you want to continue?.” Let us select Yes. I don’t think we have anything better to do on our computer right now.

9. Okay, After it’s completed. You can see a message. System restores completed successfully. The system has been restored to date. Your documents have not been affected. Now, Click the Restart button to restart your computer.

10. After restart is completed. It will automatically open the desktop screen, now the WIndows 11 black Screen of death issue is fixed.