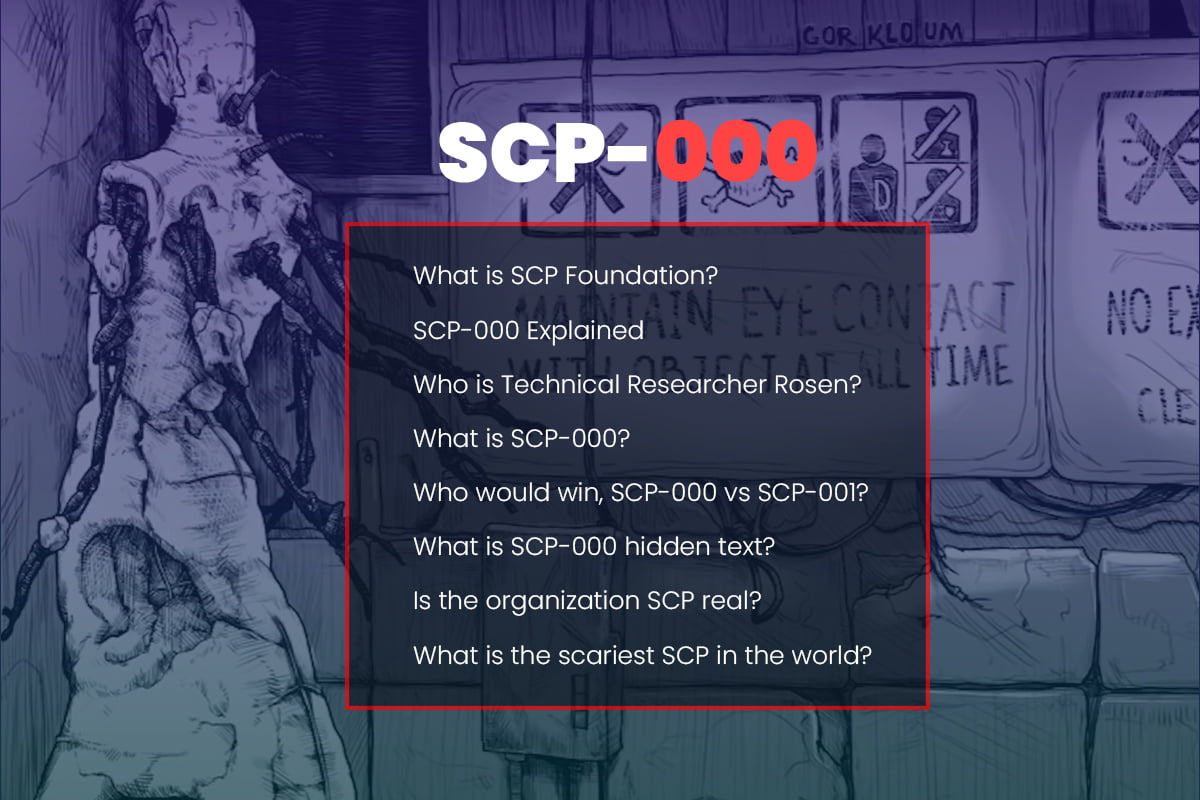 What is SCP 000? | SCP 000 hidden Text | SCP Foundation | SCP-001 when day breaks: What is SCP-000? There are thousands of creatures in the SCP Wiki, and each anomaly has its unique number. And as far as we know, the first SCP is designated 001. However, not too many people know that you discover an actual file if you look up slot number 000.

What is SCP Foundation?

You could say that the SCP foundation specializes in securing, containing, and protecting various things and entities. It’s always a new day with new challenges.

Working at the SCP Foundation might just be the most exciting job a person can ask for. And by exciting, we mean that if you work as an SCP field operative, researcher, or Mobile Task Force member, you’re much more likely to die a horrific death on the job than, say, a plumber.

But at least you get the honor of proudly saying that you’re the first line of defense between the everyday world and the terrifying domain of the anomalous. Well, unless you’re one of The IT guys.

So What is SCP 000? and why does it even exist? In this section, we try to answer this question.

Let’s begin by reading the wiki article. The first thing we see is how bizarre this film really is. It’s designated “Object Class Null”, its special containment procedures do not exist, the syntax is very weird, and the description details an error.

Welcome to the strange and frightening world of Pattern Screamers, and specifically, SCP-000. SCP-000 was first discovered entirely by accident by Technical Researcher David Rosen, a man intrinsically connected to the Pattern Screamers lurking on the SCP Foundation computer database.

Technical Researcher Rosen is actually somewhat of a celebrity around the Foundation staff due to the fact that he’s so perfectly mediocre at what he does.

The more qualified Researcher Patrick Gephart previously held his job as the glorified IT guy at the SCP Foundation, but Rosen was called in to replace him after Gephart mysteriously disappeared while on the job.

It all started when he began receiving automated repair tickets for SCP-000 – a file that had no reason to exist. As any long-time follower of the SCP Foundation will know, the universal designation for the first cluster of SCPs to be discovered is SCP-001. There is no SCP-000. It simply doesn’t exist. And when Rosen first found the file lurking on the database, he found that it was filled with worthless nonsense.

The object class was recorded as “NULL.” The Special Containment Procedures read, “Error: Field CONTAINMENT_PROCEDURES does not exist.” And the mess of a Description simply read, “Internal system error: Field undefined. Please contact system administrator” over and over again, becoming more mangled and nonsensical each time.

Technical Director Rosen, who could never resist an opportunity to complain, decided to leave an angry administrator’s note on the useless file. He claimed that this pile of junk data was sending out pointless repair tickets because of its broken syntax, clogging up the system and preventing him from doing actual work on meaningful files.

The “Error”, that is SCP-000, identified by its Research Department as an unpredictable pattern screamer inhabiting the page in SCiPnet.

Who is Technical Researcher Rosen?

Also, we are redirected to the agent’s evaluation file, a document that informs us that Rosen is often described as “inconsequential at best”. His competency level is debatable, Rosen is not believed to be proficient with the technologies he is certified in, and many of the Support Requests directed at him are often left unanswered.

Furthermore, we learn that Rosen lives out of his office, a place that has been evaluated as one of the filthiest on record. And finally, we learn that Researcher Rosen believes that he is haunted by his predecessor, Patrick Gephart, a System Analyst who disappeared mysteriously on July 29th, 2011.

And ever since, Rosen has filed hundreds of reports indicating that Gephart is stalking him. Of course, Rosen has been unable to provide any proof of physical encounters.

So as we see, it seems that SCP 000 is some form of error caused by the Foundation’s immense database, and Researcher Rosen, the man who is responsible for fixing this, is too incompetent to do anything about it.

So is this it? File number 0 is a system glitch, and Rosen needs to be fired for his lack of ability and apparent craziness? Well, not quite. This is because this file has a secret. Because if we go all the way to the bottom, we notice quite a bit of empty space, and indeed, if we highlight this space, we see some hidden text.

Usually, as an example, screamer, 000 is a cognizance implanted inside the texture of the multiverse, explicitly inside the SCiPnet section for SCP-000. Its power comes from those who see it; the more individuals know about 000, the more powerful it becomes. Ought too many to observe 000, likewise with any example screamer, it will crack and kill all who’ve seen it.

This hidden message is written in the first person and expresses the thoughts of a man of unknown origin. This person appears trapped in some bizarre location, described as an endless white plain stretching across an equally blank sky.

And in doing so, he has seen flashes of things, horrible monsters that should not exist. He describes them as abominations that appear for moments at a time, only to disappear as if they had never been there at all.

Is the Organization SCP Real?

The laws of physics do not apply to some creatures, like SCP 096 or “When Day Breaks”. It’sIt’s impossible for these entities to know when you look at them in the photo. Or how can a sculpture teleport? That doesn’t make sense! And if an object with just one touch has killed someone- well.

The sun’s heat is too much to bear. You’d melt before the scorching rays. And lastly, SCP 682 – a reptile that can never be killed? IMPOSSIBLE!!! That proves without question that there is no such thing as The SCP Foundation! If it were real, then all these people wouldn’t be alive anymore, or this earth would’ve been destroyed by now due to Keter class creatures like himself (SCP-682).

The premise of SCP-001 “When Day Breaks” is far from realistic, and it has been kept the same way because you can’t imagine what would happen in this case. Do you know what I think?

The Sun has always been a source of life, but it becomes something else entirely when the day breaks. The Sun is what creates our days and nights in an unbroken circle- its opposite variant SCP-1548 might be more than meets the eye-“Now do we know if something like this exists?” Of course not, because then everyone would have died! When Day Breaks is purely the Sun.

The basic premise of the SCP turns into a “What if the Sun turned on us?” As though it were an actual entity. Again, not realistic because our scientific knowledge-it never happened or could happen in reality.

Are the SCP Creatures Real?

There are many fictitious SCP objects in the game, but some of them were inspired by real-life events. For example, SCPA 106 is a terrifying and dangerous monster that looks like an old man who can teleport and is entirely made up of acid flesh, which slowly erodes him over time while he’s alive.

It was created after World War II when soldiers mysteriously disappeared into deep holes without any trace left behind other than their clothes being shredded to pieces on what looked like automatic turrets placed around these “scapes.”

The game starts off by transporting you to the horrors of WWI and making it seem as if there were monsters out for blood. You have your work cut out avoiding these twisted forms of war machines, such as tanks or planes – but don’t give up hope! The world is not all dark just yet because even though they’re dangerous, their power doesn’t compare with what awaits in Hellscape: World War II PMC Edition.

It then transports me back into time during World War I, where terrifying creatures awaited on every side, from lethal machine gun-wielding foot soldiers dressed head to toe in black armor through half trucks bristling cannons loaded deadly shells ready at any moment.

What is the scariest SCP in the world?

I’ve read lots of SCPs over the years, one of the SCPS that got stuck in my mind/that I find eerie is:

Who is the strongest SCP in the world?

What is the full form of SCP or SCP meaning?

There are no known official SCP’s that have the title, “SCP-001.” All of these proposed SCPs can be found on our records with their respective numbers.

David Rosen is the man who first discovered a pattern of numbers on an album cover. This number, hidden deep in fine print and encryption from what seemed like every other person looking at it before him (including me), was none other thanSCP-000 – one that would soon change everything we know about infectious media with its existence revealed through no fault or wrongdoing whatsoever by way of accident!

How many SCP tales are there?

The report is written with a clinical tone, frequently redacted data and contains articles for almost 6800 SCP objects. New additions are oftentimes added to this database as well which currently have over 4200 tales alluded to in Foundation Tales.

The information presented here should be interpreted in its entirety; it does not necessarily reflect the true state of affairs or only include partial truths

This SCP is called an error by the research department. It’s pattern screamer haunts page 000 in SCiPnet, consistently and without fail every time you open any webpage within that document!

Is SCP 000 a pattern screamer?

Yes, SCP-000 is a Pattern Screamer. The Pattern Screamer is a creature that seems to be trapped in the SCP Foundation’s database. It only ever remains for seconds at time and one has communicated with it, telling its single word “Foundation”.